Rohit Saraf is an Indian-Nepali actor who predominantly works in Hindi films. Teenagers have gone crazy after his debut web show Mismatched opposite Prajakta Koli. He is compassionate, modest and moreover, he has that smile, which can lighten up the whole world.

Rohit was born on 8th December 1996 in Kathmandu, Nepal. He is an actor by profession. He is best known for playing Rishi Singh Sekhawat in the Netflix show Mismatched 1 co-starring YouTuber Prajakta Koli (@mostlysane). He did his schooling at Saint Francis D’Assisi High School located in Mumbai. His sun sign is Sagittarius.

His height is 5 feet 11 inches

He made his film debut with Gauri Shinde directorial Dear Zindagi (2017). He played the role of younger brother Alia Bhatt. In 2017, he appeared in a Norwageon film What Will People Think portraying Amir. Saraf then appeared
in Yash Raj film Hichki (2018) co-starring Rani Mukherjee, Jannat Zubair and
others.

In 2019, he played Ishan Chaudhary in a biographical drama The Sky Is Pink co-starring Priyanka Chopra, Zaira Wasim, and Fahran Akhtar. His recent release was Anurag Basu’s dark comedy Ludo where he played Rahul Avasthi, an underconfident sales guy.

Mismatched romantic drama marked the digital debut of Rohit Saraf opposite Prajakta Koli. Then, he will be seen next in the Netflix original, Feels Like Ishq.

Apart from acting, he has worked on various tv advertisements for reputed brands like centerfruit, Kwality Wall, Hyundai i20, and others.

Rohit did his schooling at Saint Francis D’Assisi High School, Mumbai. He completed his graduation from St. Xavier’s College, Mumbai.

Rohit stays with his mother and sister in Mumbai.

Rohit stays with his mother and sister in Mumbai. His major source of income is from acting.

Rohit is someone who is not afraid of showing who he is and that’s what makes him a charming man.

We tried our best to give all the relevant information about Rohit Saraf. Hope you guys liked this article please feel free to share your opinion in the comment section. Any suggestions are always welcome.

Don’t forget to SHARE with your friends and loved ones. 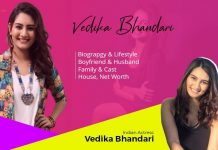