The Khatron Ke Khiladi is again back with its 11th season with more fun, thrill, and excitement. The location is set to be Cape Town, South Africa. The show will be telecasted on colors tv during weekends.  Rohit Shetty will be hosting this season as well.

She is an Indian television actress who gained immense popularity by playing the role of Dr. Ishita Bhalla in “Yeh Hai Mohabbatein” and Divya\Vidya in “Banoo Main Teri Dulhann”. In 2017, she participated in a dance reality show “Nach Baliye”, and won the show along with her husband Vivek Dahiya.

He is a popular Indian television actor who started his career with Balaji Telefilms Kartika opposite Jenifer Winget. He was seen playing the role of Ankush, Kartika’s (Jenifer Winget ) love interest.

Rahul Vaidya is an Indian singer who sings many popular songs like Tera Intezar, Hello Madam, I’m Your Adam, God Promise, Dil Dola, Ek Ladki Anjaani Si, and the unplugged version of Tera Intehaan. He was the 2nd runner-up of Indian Idol and runner’s up in Bigg Boss 14..

Nikki Tamboli is a talented South Indian Actress who is famous for her attractive look and stunning personality. She works in some popular movies like “Chikati Dadhilo Chithakkotudu”, “Thippara Meesam” & “Kanchana3”. She has participated in the most controversial reality show Bigg Boss 14 and ended up being the second runner’s up.

She is a Indian television actress and a film artist. She is best known for portraying Prerna Sharma in Kasautii Zindagii, Kay and Bindiya Thakur in Begusarai. She was the winner of reality show Bigg Boss 4 and became the first woman to win the title in the process.

Better to call him Shri Krishna, yay! This is how we know him, right? He is an Indian actor and a model who got his popularity through his mythological series. From 2011- 2014 he was seen playing the role of “Lord Vishnu in Devon Ke Dev…..Mahadev” and “Mahabharat” (2013). Then he appeared as Lord Shiva in colors tv show Mahakali – “Anth Hi Aarambh Hai” (2017-2018).

She is an Indian actress and a model who was born in Mumbai, Maharashtra. In 2012, she participated in Femina Miss India and won the title of Femina Miss Beautiful Smile. She appeared in various shows like Ishaan- Sapno Ko Awaaz De (2010), Arjun (2012), Vish (2019).

Anushka Sen is an Indian model and television actress who began her career as a child actress in the zee tv show “Yahaan main Ghar Ghar kheli” (2009). Then she appeared as Meher in sab tv’s fantasy show “Baal veer”. She played as the lead in various shows like “Jhansi ki Rani” (2019), Apna time Bhi Aayega (2020). She seems to be the youngest contestant of this season.

He is a former cricketer, VJ and an Athlete. In 2015, he participated in MTV’S popular show MTV Roadies X2. Again he participated in MTV Splitsvilla 9 along with Martina Thariyan. In 2019, he bagged the role of Rahul in ALT Balaji’s show “Ragini MMS Returns 2”. He is very fond of playing basketball.

Mahekk Chahal is a model of Indian origin born in Norway. She is a Bollywood actress who is seen playing few supporting roles. However, she played the lead role of Pooja Iyengar in “Nayee Padosan” (2003). In 2011, she bagged the position of 1st runner-up in Bigg Boss season 5.

He is a television actor best known for his portrayal of king Veer Pratap Singh in “Chandrakanta”, opposite Madhurima Tuli. His other works include “Chandragupta Maurya” (2011), “Sasural Simar Ka” (2012-2013), “Begusarai” (2015), “Kullfi Kumarr Bajewala” (2018). In 2017, he participated in a dance reality show Nach Baliye 9 and emerged as a 2nd runner-up with Madhurima Tuli. 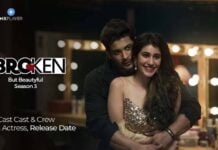